Performance management systems aren’t all fun and games, particularly for those who input data, and it is important for the data to help users. Daniel Leach-McGill, from children’s charity Good Beginnings in Sydney, said,

“the biggest hindrance is that it eats into the time our workers want to spend with clients. When staff have been able to find a direct use of the system, they interact more with it and data quality improves. Some sites are using reports straight out of the system for clients to take to court as evidence, for example when access to their children is being reviewed. They’re able to generate a report of attendance and snapshot summary of sessions over time so that the client is able to use and own it. When they can see its use, the value of the system overtakes the administrative burden.[i]”

The CHAIN database is a good example of convenient data input and use. It holds information about people who live and sleep on the streets of London. It is funded by the Mayor of London, managed by St Mungo’s Broadway and is used by authorised workers from a range of organisations.

The database is continuously updated (‘live’) and its contents can be accessed, viewed and edited by workers as they come across people on the streets or in temporary accommodation. Using smartphones, workers can interact with the CHAIN database, add the GPS location of contacts made, log activities such as arrivals and departures from accommodation, as well as access or edit an individual’s needs and barriers to permanent accommodation[ii]. The fact that workers rely on the database and use it daily provides them with an incentive to take care with the data they input.

Michael Etzel of Bridgespan works with a range of organisations to build performance management capacity. He says that there are two major benefits for service delivery organisations,

“(1) to learn about the impact and efficacy of their programming. They can’t prove their impact but they can learn and make adaptations over time. (2) to better communicate that learning to their funders and outside stakeholders…Some organisations are doing this because their funders are asking for it. Others are doing it from a place of deep belief in the power of data, which forms part of the ethos and motivation of their leadership.”

Evan Jones of St Giles Trust, a service provider to the Peterborough social impact bond, spoke about the difference the performance management system has made.

“We had a bit of a finger-in-the-air approach to understanding how clients engaged with us after our initial intensive work with them on release. A lot were drifting off but we didn’t understand why. Through the Peterborough bond, we’ve been able to see really clear trends for the first time. We can see which areas of crime young people are returning to, why people stop engaging with us, how we can stay in contact in a way that’s right for them, and be there for them to turn to if they are heading towards re-offending, as well what work and training are having the most positive effect. We’ve been getting results with some of the most prolific locals who are known for repeat offences.”[iii]

Lili Elkins from ROCA highlighted how far they have travelled on their performance management journey.

“About eight years ago we started focusing on data and now we make almost every decision about the structure of our model using that data.

Our performance-based management system really is a part of the organisational culture at this point. It’s part of what everybody does, it’s part of how we manage staff, it’s part of our executive management team. It’s used as a coaching tool: it gives us the right things to talk about. For example, once a week the full management team meets with a youth worker about a random participant. Using data, we are able to coach the youth worker and really talk about what is going well and what is going poorly for each young person and use that information to help create real change.[iv]”

Val Jones, of Social Enterprise North West, runs a program of support to social enterprises. Her clients are organisations rather than individuals, but she uses her performance management system to make changes to the program in a similar way.

“Our system allows organisations to evaluate themselves. Through a set of questions they can see where they are in relation to a benchmark, so it will show them where they need extra help. We use the information from the system to measure in total whether there’s been an improvement of organisations as a whole and identify where the gaps are. In response we could put in place a different set of support, we could signpost to other expertise or specialist support. For example, in Liverpool there’s a social accounting group, so we can signpost people to that sort of support or they could tap into what we’ve got in program.”

Social Enterprise North West manages the program and uses contractors to deliver it. The performance management system is essential to communicating information between these layers. “The big thing for us is that contractors that sit between us and the frontline have enough information to signpost people to where they need to go. We see the whole picture, but they see the first result, for the individual organisation.”

Val also uses her performance management system to provide information she can use in conversations with investors.

“Part of what we’re about is raising the profile of social enterprises and the impact on the economy and so we always try to bring an economic argument to what Social Enterprises bring to the table. Without the system I could never demonstrate what these organisations can do socially, environmentally, economically. When you have a conversation with an investor that’s what they like. They always ask ‘How much?’ Now I can tell them [v].” 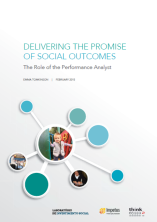